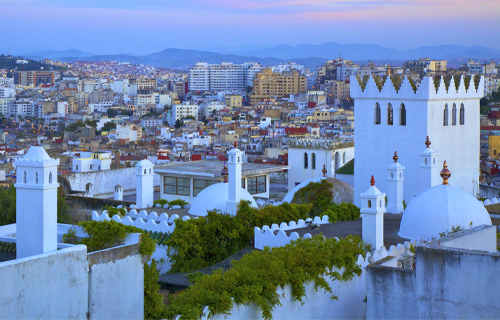 A Large tour that will  give you the opportunity to discover the major part of Morocco, and the  several traditions accordingly to the regions. This tour will lead you through the most important places and top visited in Morocco,

Tanger, Chefchaouen through the Rif Mountains to Fes (first imperial city), then descending to the desert of Merzouga for unforgotten night under a luxury tent, to experience a camel ride.

You will be impressed of the landscape and the Oasis along the road, and uncover the hidden Morocco

– After breakfast, check-out and start the visit of Chefchaouen, a beautiful mountain village whose white and blue characterize as best you can see of the cultural union between Arab culture and Spanish.

– Short walk to the center of the town of Chefchaouen to wach this spectacularly houses and its beautiful doors.

– Leave Chafchaouen toward the ruins of the Roman city (VOLUBILIS), flourishing since the third century.

– free time for lunch and start the guided visit of the archaeological site, performing the classic road to visit lasting just over 1 hour, then continue to MEKNES, This former Imperial City founded in the 9th century including the old ramparts and the Agdal basin which was used the favourite concubines.

-From the bus, you will see the beautiful Gate, Bab Lakhmis: a large decorated gate from the 17th century. And Bab Mansour gate, named after the architect, El-Mansour, the gate itself is now used as an arts and crafts gallery.

– Continuation to FES for accomodation.

– Check in the Hotel, dinner and overnight

-After breakfast, the day will be devoted to discover Fes, the oldest of the Imperial Cities, which is well known for its spiritual and educational contributions to the Moroccan culture. .

-Starting from the NORTHERN BORJ: Majestic fortress dating back to 16th century,

– The traditional ceramic and pottery industry, you will also explore the famous souks where craftsmen still labo in the age-old oriental tradition.

– Visit Bou Inania Madrasa; quranic school and the University of Al-Karaouine: mosque-religious school / college was founded by Fatima al-Fihri in 859.

– Fes is also famous for its leather products and most of it comes from the leather bazaar (souq).which is home to three ancient leather tanneries, the largest and oldest being the Chouara Tannery, almost a thousand years old.

-Free time for Lunch and continue your visit of the Souq till 4pm, then back to your hotel for rest      b

– Half board (breakfast & diner)

– Half day excursion by 4×4 water included

– Diner with show in the desert(folkloric group)

– Guide in any city tour

From Our prevIOUS TOURS

SIGN UP TO OUR NEWSLETTER TO receive our updates